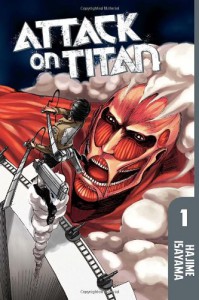 There's a lot of hype surrounding Attack on Titan, though a lot of that is for the anime version. I've never seen it, and after reading the first volume of the manga, I don't know if I'll bother.

Attack on Titan is based on a solid premise: a century ago, man-eating giants, called titans, suddenly appeared and attacked humanity en masse. Now, the remaining survivors live inside high, thick walls, and have generally given up on defeating the titans. So far, so good. And what the manga does best is to give you a very real sense of the panic and desperate fear that goes with a titan attack on the city. When the titans were actually attacking, it was a riveting read.

But the book doesn't spend all its time detailing attacks. That's probably a good thing, in general, because I just would have gotten tension fatigue. But this is where the problems come in. The characters aren't particularly compelling or likeable, and the dialog isn't convincing. It's possible that the latter could be due to the translation, but Kodansha translations are usually pretty good.

And I hate the art. It looks amateurish to me. There are a few panels that are effective, and the titans' designs are chilling, but in general it just looks clumsy. It seems like the anime has a different, and much better, art style.