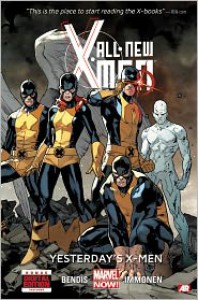 I just don't care for the premise of this book. The idea of bringing the teenage original X-Men forward in time just doesn't appeal to me in the slightest. This may have something to do with the fact that I'm not terribly interested in any of the original X-Men, not in their teenage states. Cyclops just got interesting five minutes ago, after all. So this just isn't the book for me, and I'm not surprised that I didn't really enjoy it.

But I do find myself fascinated by the tension between Cyclops and the X-Men he left behind. This could go in really interesting ways, outside the pages of this book. What made Magneto such a compelling character to me was that I always felt like he had a point, and that he and Xavier were not nearly as far apart in ideology as it seemed at first. Putting Cyclops in the Magneto role brings the two sides even closer together. There's a scene, fairly early in the book, where Cyclops breaks a mutant out of prison. Why was he in prison? Because he healed an injured friend. I had the distinct feeling that the only reason that the Wolverine/X-Men faction disapproved is because Cyclops got there first.

That, for me, isn't a problem in the book. I think it's fantastic. I like that the answers aren't easy, and that I can sympathize with both sides, to an extent. Likewise, I don't mind that there's a huge variation in how characters viewed Cyclops under the influence of the Phoenix Force. Was he in control or possessed? How much blame should he take for his actions? It seems like almost every character has a slightly different opinion, and I imagine that holds true for the readers, as well. And I think it's more interesting than simply saying that Scott was/was not entirely responsible for what he did while Phoenix, full stop.

But the teenage time travelers... Not for me. Sorry. I look forward to seeing some of the tensions that I saw in this book worked with in other places, but not here, not for me.
Tweet