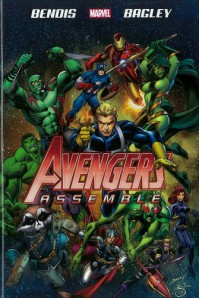 Obviously, the idea here was to try and pull in new fans. People who saw and loved the Avengers movie, but who haven't read the comics. Or people like me, who only read a very little a long time ago. That explains the cast, the exact Avengers who feature in the movie. That also explains the nature of the galactic level threat (it has to be big, and it has to be something that an audience with little background can understand). And it also explains the major team up in the book: Avengers meet Guardians of the Galaxy. For a lot of readers, including me, this will be the first time they get to see that space raccoon that Marvel is going to put in a movie and turn into a plush toy that will sell by the truckload.

There is absolutely nothing wrong with any of this. Maybe a long-time Avengers fan would disagree, but I am not one of those people. I appreciate a chance to get to see the characters that I liked in the movie in action again, and to possibly ease me into reading more Marvel. Unfortunately, the end result this time is not a shining moment for Bendis. There's nothing wrong with this book, don't get me wrong, and it is mostly a fun read. But it's almost entirely non-stop action, with no time to get to know the characters. And there's little room for dialog, which is a shame. But this had to be a non-stop action blockbuster, apparently, so that's exactly what it is. This would probably make a fun movie. Marvel Phase 4? But to hook a casual, movies-only fan on the comics? Unlikely. This is exactly what people who don't read comics tend to think all comics are like: nothing but action, with no real human interest or attempt to do anything but blow stuff up good.

And I'm not saying that mindless action comics are a bad thing, necessarily. I'm a huge fan of Mythbusters, I love watching things get blown up good. I don't think I'd even hoped that this would be anything but an action movie. It absolutely does not break one centimeter of new ground, and I'm actually ok with that. I'm just saying mind your expectations. Don't expect to get to know and understand these characters better, because you won't. Expect only that you will see a bunch of action, on a huge scale, and that you'll meet a space raccoon, and you'll probably be happy enough. I was.
Tweet