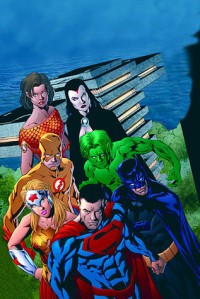 The first half of this book, with the time traveling plots, feels rushed. I fully admit that I might like the part with the Legion better if I knew anything at all about the Legion. But it just seemed like it was over so fast, almost like it was a mandated crossover that the writer was just getting out of the way. Likewise the "ten years later" part of the crossover, featuring a very dark future version of the heroes. It felt like a bit of an author tract against dark-for-the-sake-of-being-dark comics. Which, point taken, but others have done it rather better.

Things improve in the second half, where the book devotes itself to dealing with the fallout from [b:Identity Crisis|26085|Identity Crisis|Brad Meltzer|http://d.gr-assets.com/books/1327948044s/26085.jpg|530148]. First, Tim dealing with his father's death and then a newly dangerous Dr. Light, adding in all the extra baggage of the villain mindwipes Identity Crisis revealed. I'm honestly surprised that Teen Titans was the book to tackle these issues, but I'd say they did a fairly good job of it.
Tweet