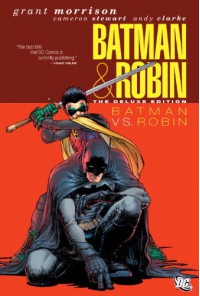 Batman vs. Robin picks up right where the previous volume of Batman and Robin had left off. The first half deals with Dick's attempt to raise Bruce from the dead in a Lazarus pit. It goes about as well as you might expect. This storyline I really liked. Dick would absolutely go that far to save Bruce, without question. I also liked Batwoman showing up and being very cool. And hey, the Knight and Squire show up again, and I have a deep and abiding love for them.

The second storyline gets a little... Well, there's something about Batman being in the past or something, and maybe Bat demons, and it was all just a little disjointed for me. Points for bringing the interesting Gravedigger into the discussion, and some good back and forth between Damian and Dick.

Each arc is done by a different artist. I greatly preferred Cameron Stewart's work on the first arc to Andy Clarke's on the second. Clarke still did a decent enough job. The covers remain improbably cool looking.
Tweet