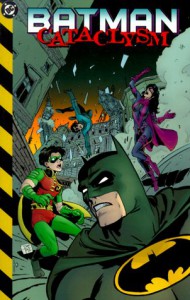 Sometimes, DC editorial can come up with some pretty bold ideas, and this was certainly one of them. Take Batman, and the entire massive line of Bat-family books, out of their comfort zones (fighting crime) and put them in a situation that they're ill-prepared for, and that even their best efforts will be unable to fix. In this case, a massive earthquake all but leveling Gotham. There's no super villain to fight, and they won't be able to save everyone. Like I said, a pretty bold idea. Cataclysm works best when it's operating on that level.

But for some reason, near the end of the book a super villain was brought in. It's a major misstep in what had been actually going pretty good. It's unnecessary, it's a dull story, the villain is hardly compelling, and it distracts the attention of both the reader and Robin (who performs quite well here, I'll admit) from what is and should be vastly more important. It's like somebody (the editorial staff? the writers? who cares?) couldn't stand doing a big Batman story without some kind of villain.

The writing and art is, naturally, uneven. Unless I miscounted, the trade represents about half a dozen ongoing monthlies and two one-shots. That's a lot of hands on deck, and it doesn't even include everything that was tied in to Cataclysm at the time. It would have been really nice if the divisions by issue were made more clear, because I honestly have no idea which stories were from Shadow of the Bat, Detective Comics, or Batman. Some of them were better than others, of course. The one that stands out most to me is the simple two page story of a boy and his lunchbox that closes the volume.
Tweet