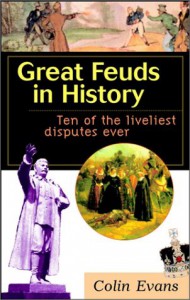 This is not the sort of book that one is likely to pick up unless one is already a history buff. But a history buff will have at least a passing familiarity with the feuds mentioned here. This is more of a refresher/teaser for people looking for a little more information than anything else.

The book is divided into chapters, each covering in about twenty pages or so one of the feuds. That's actually a pretty decent amount of space to give each a fair amount of coverage. The writing is engaging enough, but it's really the events themselves that keep the pages turning. I think an author would have to try very hard indeed to write a boring version of the feud between the Hatfields and McCoys, for example.

So what's covered? We have Elizabeth I vs. Mary, Queen of Scots, Parliament vs. Charles I, Burr vs. Hamilton, Hatfields vs. McCoys, Stalin vs. Trotsky, Amundsen vs. Scott (ie, the race to the South Pole), Duchess of Windsor vs. Queen Mother (ie, the Wallis Simpson debacle), Montgomery vs. Patton, Johnson vs. Kennedy, and Hoover vs. Martin Luther King, Jr. My general level of interest in the subject determined how interested I was in the chapter. The best one, in my opinion, was the quite tense story of the race to the South Pole, with all its aftermath. But a Russian history buff (which I am not) would probably enjoy the Stalin and Trotsky chapter, provided it wasn't too much of a rehash for somebody familiar with the subject.

This is the sort of thing that's meant to be read a little at a time, by somebody highly interested in the history involved. And it does that well enough, but it's really just a teaser.
Tweet